Skip to content
Previous Next
Is Lithium Really the New Oil?

Is Lithium Really the New Oil?

“Lithium is the new oil,” has almost become a mantra with electric vehicle (EV) enthusiasts. The enthusiasm has generated a great deal of interest in electric cars and battery plants and other potential high-growth energy markets.

It’s an emerging trend that’s just getting started.  For EV’s the lithium-ion battery is the dominant design standard because of its remarkable renewable and rechargeable abilities. Vast amounts of lithium are required to build a typical rechargeable battery, along with other raw materials—like cobalt and graphite.  The numbers look challenging as a single EV battery for an 80 kWh electric car requires the equivalent lithium as 15,000 cell phone batteries.

This lithium-powered craze has created a great concern and uncertainty for scalability. Back in 1908, when the first combustion engine, the Model T, was introduced for mass use there was no shortage of oil. An entire supply chain was eagerly awaiting new customers to power the new “horseless carriages”.  With electronic vehicles this is not the case. In fact, the exact opposite is true.

From a macro perspective — minerals like lithium may indeed seem like the new oil. The lithium market reflects oil price spikes in the 70s. There has been a tremendous rise in its spot price.  Lithium parallels an equally aggressive increase in the demand for raw materials.

Demand is accelerating faster than battery grade lithium can be produced and delivered. Even by conservative measure, within the next few years demand is expected to outstrip the current supply by 10-15%.

The situation is similar to how the ‘Big Three’ in the automotive industry (GM/Ford/Chrysler) dominated the auto industry for many years, just three companies tend to dominate the current lithium mining market. Together they comprise over 85% of the total lithium produced.

Just like the automotive industry, lithium’s Big Three are continually being challenged for market share.  The Big Three are “hard rock” lithium miners.  The new challengers are primarily seeking to use technology to improve leaching extraction.

Another significant threat is coming from China, which is moving to center stage of the electric vehicle market as the nation moves to meet 10% electric vehicle supply requirements. China’s new economy is requiring automobile manufacturers to build more new energy vehicles by 2020.

This opportunity has generated a significant number of new strategic partnerships – from early stage research and development to market entry –are shaping the lithium landscape. The impact of these emerging relationships and consolidation of established companies are evolving rapidly in the attempt to satisfy the accelerating consumer appetite and the ambitious electric vehicle quotas that have been set by many countries.

Lithium demand is exploding. Compounding the lithium EV battery supply problem is the technological rise of many other lithium-based products. Many portable electronics such as watch batteries, mobile phones, personal electronics, power tools, lawn mowers require the same quality of lithium. These products are also coming to market faster than the supply-chain’s ability to support them.

While it is widely acknowledged that there are vast deposits of lithium around the world, currently limited resources, reserves and production have caused significant production lags in terms of years, as it takes that long to cultivate new sources.  Limited investment capital has also contributed to imbalanced of supply and demand. 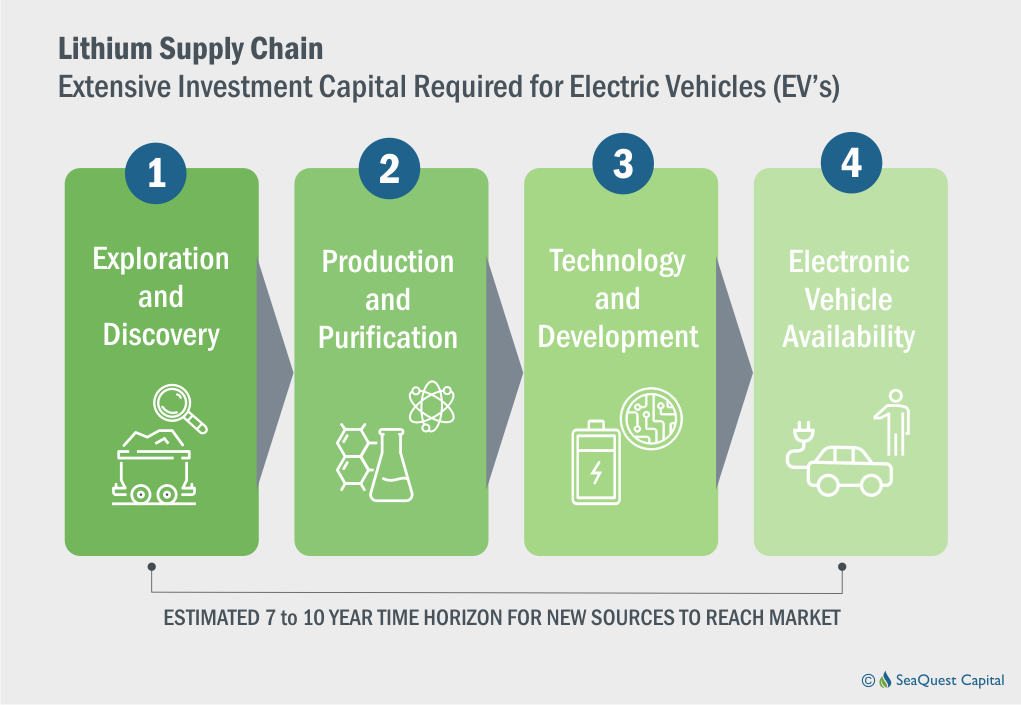 For nearly two decades lithium an obscure lightweight metal has been a sleeping giant. Since it takes up 10 years to develop from exploration to production and delivery, the lithium supply plight is unlikely to be resolved any time soon.

Analysts have conservatively placed lithium demand growth at 10% annually for at least the next decade — more than quadrupling total demand by the year 2025. Today’s quest for lithium is similar to the early oil explorers in the early 20th century that were on the forefront where new technologies led the energy source shift from coal to oil. And like oil, lithium promises to in many ways be instrumental in shaping the new economy and oppotunties.